Visiting a stunning section of the South West Coastal Path

The Lizard Peninsula is the most Southerly point on British mainland and is well known for its rare and unusual flora and rich wildlife.  At just over an hours drive from Butterwell Farm it’s good to set off early to make the most of the day.
Kynance Cove was our first port of call.  Owned by the National Trust, Kynance Cove is one of the most photographed and painted locations in Cornwall.  Not to mention it features as Ross Poldark’s beloved Nampara in the hit BBC series Poldark.  It’s a 10-15 walk down some quite steep steps from the National Trust carpark but once you’re there you’re rewarded with white sand and turquoise waters at low tide.  If, like us, you head there in the rain at high tide, you can still enjoy a Cornish Pasty or cream tea in the eco-friendly, National Trust owned Kynance Cafe with a dramatic view to the Atlantic ocean. 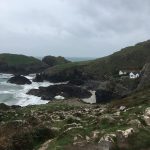 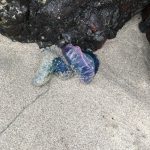 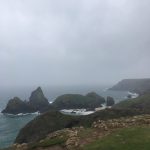 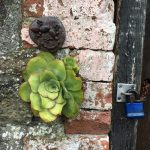 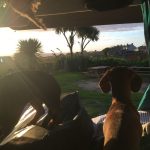 After taking in some of the South West Coastal Path with the dogs we headed 5 miles North to Mullion Harbour, which is also owned and managed by the National Trust.  A beautiful, quaint fishing harbour with a small beach and the opportunity for some sea kayaking with some dramatic caves to explore.  Just half a mile off the harbour is the uninhabited Mullion Island which is part of the local Site of Specific Scientific Interest. The island is home to breeding Great black-backed gulls, guillemots, shags and cormorants.  It is also common to see seals bobbing up and down and basking in the harbour and around the island. 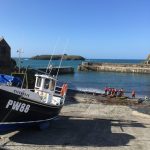 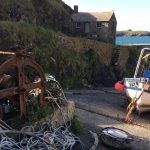 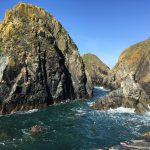 Rugged coastline of the Lizard 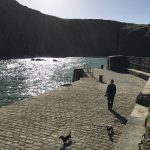 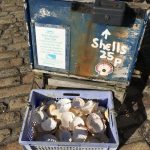