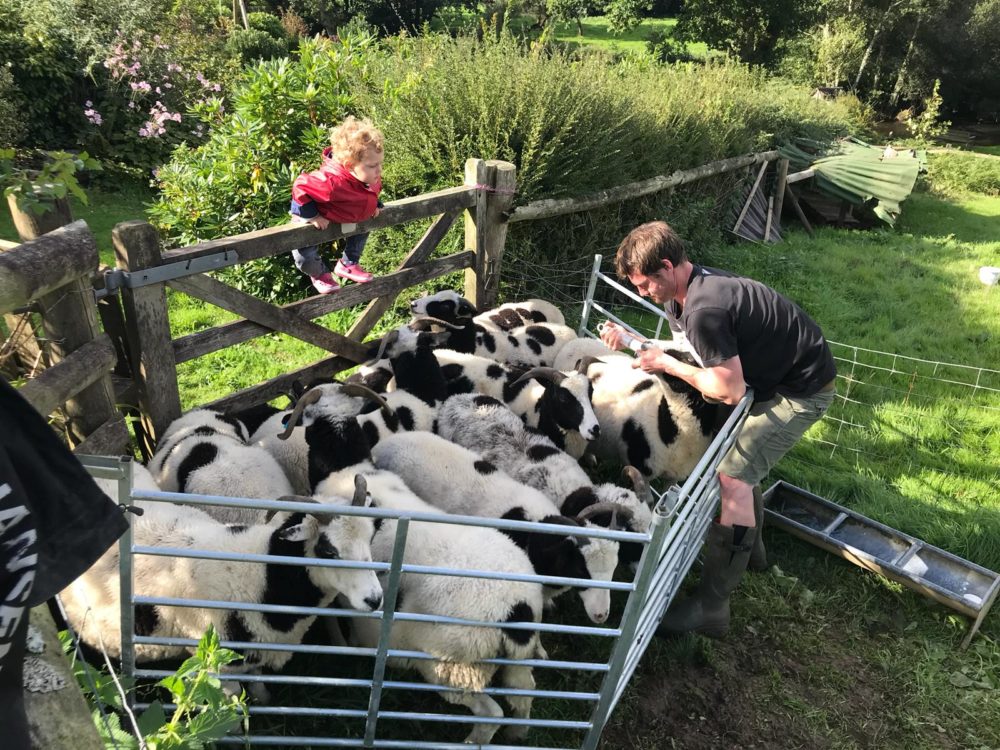 Customer Feedback
2018 proved to be a fantastic year for guest reviews across all of our properties.  Guests that came to stay in the newly renovated Buzzard Barn were very impressed with the finish and the cosy feel we have created.  The new window seat with panoramic views of the River Camel, Camel Valley and Vineyards is a real hit with people of all ages and their furry friends to be able to sit back and relax and watch the wildlife go by at Butterwell Farm.

We now have over 100 five star reviews on TripAdvisor with 94% of the total reviews being five stars.

If you would like to book any of our properties at Butterwell Farm please just send us an email with your enquiry: info@butterwellfarm.com
Availability calendars can be found on our Booking Page.

Butterwell Farm Cottage Improvements
As well as achieving great success on phase one of Buzzard Barn we have also been busy in the other properties continuously aiming to improve our guest comfort and experience.  The lounge of Butterwell Cottage has been re-decorated and the window seat replaced.  It has also benefitted from some garden landscaping and new fencing to create a nice secluded atmosphere and an improved aspect for the picnic and BBQ area with evening sun and views down to the River and beyond.

Buzzard Barn phase two is due to commence next week for six weeks.  Amongst other things, the exterior roof will be completely stripped and re-built with new slates.  We look forward to showing you the results in due course.

Filming Location
Last summer Butterwell Farm was excited to host FFP New Media to film scenes for a Rosamund Pilcher adaptation for German Television: “Stormy Mornings“.  It was a very exciting day and seeing the Butterwell Estate on screen was wonderful – it clearly makes for a stunning backdrop! 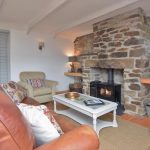 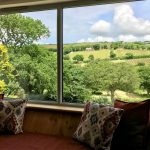 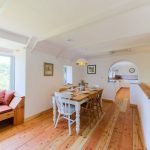 Rustic farmhouse style table with space for everyone 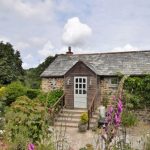 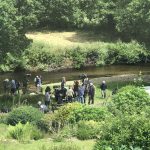 Estate Management and Wildlife Notes
The 40 acre Butterwell Estate continues to provide an incredible habitat for all sorts of wildlife here in Cornwall.  Being surrounded by fields, forest and river means we have an ideal secluded location for wildlife to call home and thrive.  Don’t forget to pack your binoculars as all of our cottages enjoy stunning views of the estate and you only have to glance outside for a moment or two to catch sight of wildlife on your doorstep.

The trees we have strategically planted along the river bank to protect it from erosion are doing well and establishing nicely.  Our efforts to gradually improve the fencing on the whole estate continues in between the other projects.

We got our act together last autumn and bought an apple press and we are still enjoying the fruits of our labour regularly.  The combination of trees in the orchard at Kingfisher Cabin seemed to provide a winning combination!

We lambed last spring and now have a lovely strong flock of twelve ewes.  We haven’t lambed them this year as we decided we needed a little break as we had welcomed a new little one of our own – also in the Spring of 2018! It was a busy season.  We hope to put a ram to them again this year to keep the flock young and healthy – and most importantly to help Sam cut the grass! 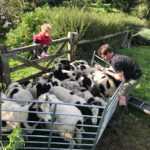 Sam & Jack tending to the flock 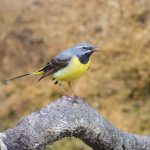 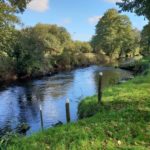 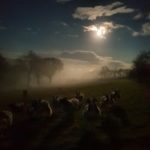 Fishing Season Summary 2018
It is difficult to imagine two more different years of weather as we have just experienced at Butterwell. If 2017 was a washout then 2018 has to be the driest ever experienced after an exceptionally cold spring! From June onwards the lack of water played havoc with Salmon and Sea Trout fishing across the whole of the UK and even as far northern Norway, where many of Europe’s largest Salmon rivers were closed due to excessive water temperatures. Rather perversely, at Butterwell we observed plenty of fresh Sea Trout and Salmon running the river from June onwards although, in very low, clear and warm water conditions, they often moved through quite quickly and were more difficult to tempt. We have always known Butterwell does well in low water conditions so it was perhaps not surprising to see such good numbers of fish but the water temperatures and the fast running nature of these fish did impact catches and more so the  persistence for anglers in such swelteringly hot conditions.

There was an early run of fish in June and Stephen Shore from Bordon got the Catch Return moving in the first week with a brace around the 1.5lb mark. Although Butterwell was lightly fished, June produced eleven Sea Trout to 3lb. During this time we spotted some quite extraordinarily large fish moving through the beats, which stayed in the river despite some very close encounters by visiting anglers at night! We had a visit by Daniel Osmond from Exeter University around this time, conducting research on our Lampreys, and in addition to finding a Lamprey nest excavated in the river (picture attached) he managed to spot some of these huge Sea Trout. In July and August it gradually became more difficult to tempt the fish although fresh fish were seen moving through on most days and when anglers persisted they were rewarded. Notably Robin Shellard managed ten peal in one night in late August. In total we managed 45 Sea Trout (91% returned), which is less than half of our normal tally. This could have been a lot higher with more pressure from the anglers, although it was difficult to expect more effort given the sweltering conditions even at night. The best fish landed was a 5lb fish (picture attached) which was spotted moving at dusk by regular visitors Martin Bodley and his wife on an evening stroll, and duly caught by the local guide after Martin had decided to take the night off!

The good news for the future is that the electro fishing survey results were much stronger in 2018, comparable with the best years over the last twenty years, and  together with the strong runs of fish seen in 2018 augers well for the future of Camel Sea Trout.

We hope to see lots of you fishing for these wonderfully sporting fish over 2019 Summer Nights. 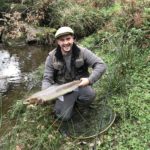 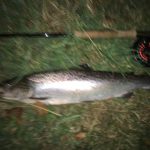 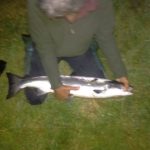 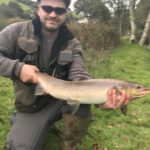 It’s been another disappointing year for Salmon on the Camel along with most rivers in Britain, exacerbated by uninterrupted drought conditions from June to November. Large salmon were spotted in surprising numbers in June and July running, in seemingly hopeless conditions and not really fished for under Butterwell’s strict night fly rules in low water conditions. Perhaps not surprisingly, these fish did show interest in Sea Trout fishermen’s flies particularly at dusk, when a few large fish were lost. The highlight of these encounters was a 17lb bar of silver landed by Johnathan Meredith from London on 28 June (picture attached) from Upper Denby, hooked just after a flash of lightening! Catching a Salmon on night fly in Britain is really very rare and this absolutely fantastic fish was safely returned. Shortly before this Johnathan’s son Tom had lost a very large Sea Trout at the net in Dead Elm, so some luck was due!

When rain did arrive in November it was evident that most fish had run in the Summer and sport was limited to just eight further salmon, which included a splendid brace by Will Barrett of 13lb and 14lb on 4 November (picture attached).

The electro fishing results in 2018 showed some improvement in Salmon fry and par densities in the Camel but levels remain of concern and have prompted the EA to extend the Emergency Bylaw introduced in 2017, pending a decision to extend the Bylaw for the medium term or introduce a voluntary catch a release scheme along the lines introduced across England in 2019. As things stand, compulsory catch and release for Salmon and restrictions on worm fishing and hook sizes remain. Current restriction are set out on the Fishing Page of our website. We will update our regular anglers as soon as we are advised of any changes.

In the background, estuary nets have been closed and large efforts are being made by West Country Rivers Trust and the EA, using EU funding, to improve habitat and removing obstructions to migratory fish, including some very large long term projects which have the potential to significantly increase spawning areas in the catchment. It is hoped that these projects together with the spawning gravel restoration by local angling clubs will at least improve the environment for Salmon and Sea Trout in the river.

Thank you to all those who visited Butterwell in 2018 and Tight Lines for 2019.

We look forward to seeing you at Butterwell Farm soon.