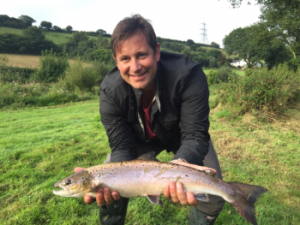 The 2016 sea trout season at Butterwell was mixed but a return to better times. The total of 66 sea trout (61 returned) on night fly does not do justice to the number of sea trout running the river. Large numbers of fish were seen regularly in June and July, even running during the day in tinged water conditions.

June and early July were fished most evenings by at least one rod and yielded over 50 sea trout, including a good number of well-conditioned deep fish over 3lb. The largest was 8lb caught by Rick Garrard (pictured), although a few exceptional fish were lost after some quite spectacular battles. Anglers were also privileged to observe groups of lampreys spawning at Butterwell by day during June https://www.youtube.com/watch?v=jth91TT6tLw.

Throughout most of the autumn large groups of sea trout, including many big fish, were still seen congregating on gravel runs in advance of their spawning run. We continue to encourage night sea trout anglers, whether holiday guests or day rods, and will be offering free guiding to our guests in 2017. 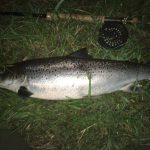 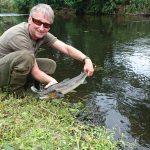 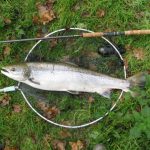 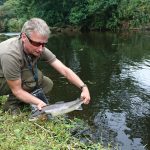 Catch & Release on the River Camel

It has been another difficult year at Butterwell for Salmon with a total of 23 (20 returned), largest 9.5lb caught by Mike Laughlin. Our salmon season got under way after a dry summer with eight fish at the beginning of September in low water. A moderate fall of rain over the first weekend combined with spring tides pushed a reasonable run of further fish into the river despite only a few inches of extra water and only tinged water. Five further salmon to 7lb were caught on a mixture of fly and worm including a salmon for John Clacy from Guernsey (pictured) on each of his first two days salmon fishing!  A further nine fish were picked up in late September and October including a first for the Resident Ghillie. There were quite a few silver fish seen jumping in December and Ian Richards eventually managed to catch one of these fine specimens on 10th December.

It appears salmon arrived early in low water over the summer and fishing tailed off in the final two months for a third successive season, although a run of silver fish were seen in December. The pattern is being repeated all over the country, as summarised in the Editor’s Letter in January 2017 Trout & Salmon magazine, including a suggestion that the long term cycle is moving back to spring and summer runs. We will continue to allow daytime fly fishing in May and early June until the Sea Trout numbers start to build and will monitor the position closely in 2017 to see what further changes to our seasons and methods might be necessary in the future.

On a more positive note, there is considerable hope that West Country Rivers Trust will be receiving a very substantial grant to help rejuvenate the River Camel. This together with the continuing work by local working parties on the spawning gravels will hopefully bear fruit in the future.

To keep an eye on river conditions on the River Camel don’t forget to visit our River Cam: http://www.farsondigitalwatercams.com/locations/nanstallon

Wishing You All Tight Lines For 2017